No. 7 UNG Men’s Golf Up Two Spots in Rain Halted Second Round 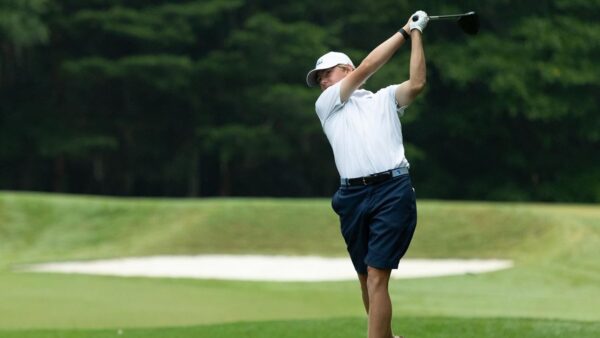 (VALDOSTA, Ga) – The No. 7 University of North Georgia men’s golf team climbed two spots to 13th place in the second round, which was halted due to rain and lightning Friday afternoon.

North Georgia was one of nine teams to finish the second round, shooting 2-under on the day. Evan Thompson was again the low Nighthawk, firing a 3-under 69 to climb into a tie for fourth place. Thompson was 5-under at the turn after three birdies and an eagle.

The Nighthawks currently are nine shots back of sixth place, which is the cut line for the national championship. Barry is in the clubhouse at 17-under for the tournament, while Limestone is two shots back in second with all five of the Saints through 12 holes in the second round. West Georgia, Barton and Florida Southern round the top five, and Georgia Southwestern is currently in sixth place.

Thompson is currenlty in a position to advance as an individual should UNG not advance as a team.

The conclusion of the second round will start at 7 a.m. with the teams that have already finished round two beginning their final rounds with a 7:30 a.m. tee time.