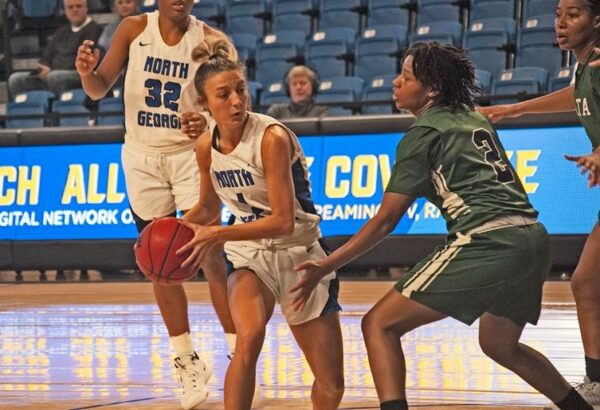 (DAHLONEGA) – The No. 5 University of North Georgia women’s basketball team improved to 4-0 on the season with a 67-58 win over Delta State Friday night in the opening game of the UNG Nighthawk Classic.

North Georgia jumped out to an 11-8 lead before the Nighthawks extended the lead on an 11-1 run that spanned into the second quarter. The Lady Statesmen and UNG traded buckets throughout the rest of the half as North Georgia led 35-22 at the half.

UNG continued its hot start into the third quarter where they used a 9-0 run to take a 21 point lead before DSU battled back to the nine point final deficit.

NOTES
– Four Nighthawks finished in double figures, led by 12 each from Julianne Sutton and Caroline Martin. Macey Gregg added 11 off the bench, while Jamari McDavid put up 10.

– In the second game of the classic, Clayton State defated Montevallo, 70-58.

NEXT UP
North Georgia will take on Montevallo in the final game of the UNG Nighthawk Classic at 2 p.m. tomorrow afternoon.