No. 22 TMU advances to AAC semifinals with win over Union 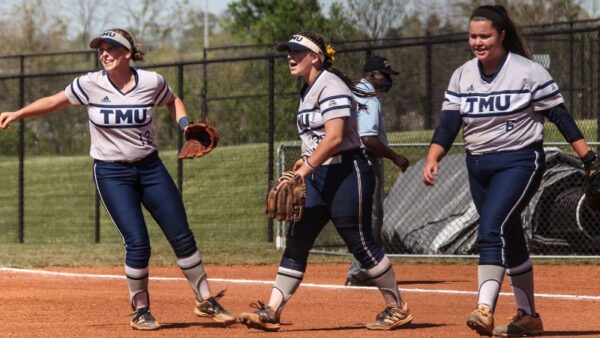 (KINGSPORT, Tenn.) – The No. 2-seeded Truett McConnell University softball team, and No. 22 nationally-ranked Lady Bears, clinched a 4-1 win over No. 7-seeded Union College in the Appalachian Athletic Conference Tournament quarterfinals to advance to the semifinals of the winners bracket on Tuesday afternoon. The win put the Lady Bears at 29-12, 21-5 AAC on the season, while the Bulldogs fell to 21-21, 15-11 AAC.

TMU is now set to play at 6:00 p.m., on Wednesday evening against the winner of the Bryan College and Reinhardt University game.

FIFTH INNING RALLY
TMU’s defense proved their grit right off the bat in the first inning when the Lady Bears forced Union to leave three on base after a perfectly executed double play and fielder’s choice. Neither team was capable of getting up on the board through the first four and a half innings despite multiple chances. Mikayla Sullens gave the Lady Bears the spark they needed to score four runs in the bottom of the fifth with a leadoff single to left. Pinch runner Katie Carruth put TMU up on the board first on Briley Lawson’s walk (1-0) and Mattie Brooks followed up with a single up the middle to drive home Alicia Price and Ashleigh Lawson (3-0). Lastly, the AAC freshman of the year, Lauren Barrett, singled to right, which scored B. Lawson, to give TMU the clutch four-run cushion to ultimately secure the win (4-0).

The Lady Bears went on to load the bases in the bottom of the sixth once again but all three were left on base before Union attempted to come in from behind in the seventh. The Bulldogs were capable of scoring one run (4-1) but it proved not enough after a Union baserunner was called out for leaving third base too early on what would have been a sacrifice fly.

Pitcher Bethany Hyde was credited her 12th win of the season after tossing six innings of seven hits, one earned run, four walk and three strikeouts.