No. 21 TMU secures nail-biter against Bulldogs 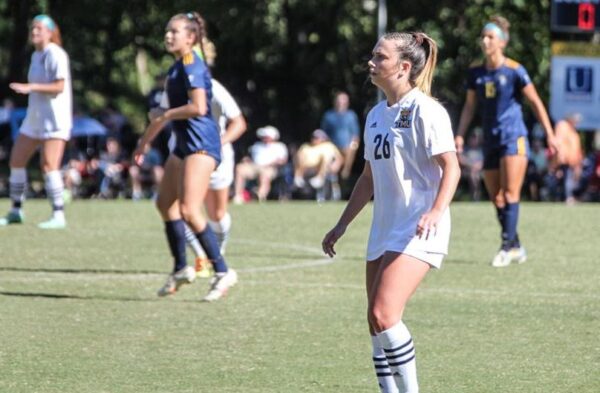 (CLEVELAND) – The Truett McConnell University women’s soccer team returned home to face Tennessee Wesleyan University inside the TMU Soccer/Lacrosse Complex. The Lady Bears battled hard through a scoreless first half and secured a 2-1 win to increase their win streak to eight. TMU rose to a record of 11-1, 8-0 AAC, while the Bulldogs fell to a record of 6-3-1, 3-2-1 AAC.

The Lady Bears remained competitive on offense for all of regulation. Within the first five minutes of period one, a corner kick from Eliska Dvorakova resulted in a shot on goal from Ella Weir, followed by  Sydney League with an attempt at a header. A shot on goal from Brianna Hernandez was TMU’s final opportunity at the end of the period. In the second period, Hannah Logue, assisted by Eliska Dvorakova, had the first goal within the first four minutes (1-0). The Lady Bears continued to fire with shots from Dvorakova, Hernandez and Ashleigh Smitherman. In the 56th minute, Dvorakova, assisted by Hannah Logue, scored the second goal of the day (2-0). The Lady Bears remained resilient on offense, but the Bulldogs fought back by scoring their first and only goal in the 68th minute (2-1). TMU closed out the game with a blocked shot from Hernandez, securing a 2-1 victory.

The Lady Bears will hit the road  Wednesday, October 13 to face AAC opponent, Columbia College, with a kickoff time of 3:30 p.m.