No. 21 Lady Bears make history after being named AAC Champions 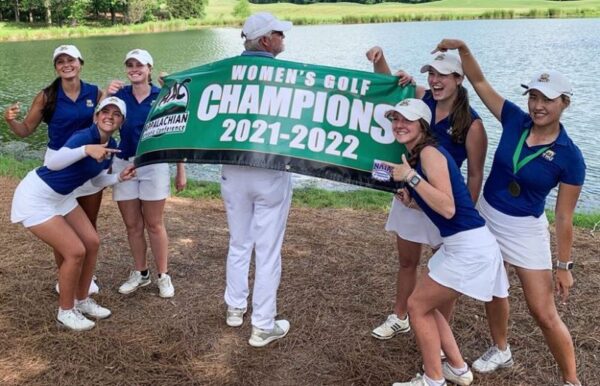 (ADAIRSVILLE) – On Tuesday, the No. 21 Truett McConnell University women’s golf team made TMU history at the Appalachian Athletic Conference, where the Lady Bears were crowned AAC Regular Season Champions and AAC Tournament Champions after tallying a final team score of 615. No. 13 Milligan University was seen finishing 11 strokes behind TMU (2nd), while No. 12 SCAD-Atlanta finished with a final score of 643 (3rd).

“This was such a momentous occasion for our golf program! We have been building this program for several years and to see it come to fruition with a conference championship was such a blessing,” said Head Coach Steve Patton“

The Lady Bears are the first team in TMU Golf history to earn both conference titles, while Coach Patton was named the AAC Head Coach of the Year. By securing the team victory, TMU punched their ticket to the NAIA National Championships.

“These ladies deserve so much credit for their hard work and determination, but I also want to give thanks and appreciation for all of the ladies who came before them. We had ladies who came here and bought into our vision and they are a big part of this championship as well.”

Freshman MinJi Kang, the AAC Player of the Year, individually placed first overall after shooting a sharp 68 through round one and a 69 through round two, her seventh consecutive victory. Kang earned s spot on the All-Tournament Team, along with earning a spot on the All-Conference First Team.

“I want to give thanks to all of our coaches, parents, administration, faculty, staff, and friends of the program who helped us reach this goal. They say it takes a village and it certainly does! Lastly, I want to thank our Lord and Savior Jesus Christ for keeping us safe, healthy, and together this season, and for my ladies desire to grow closer in their personal relationship with Him!”

Up next, the Lady Bears will travel to Oklahoma City, Oklahoma on Tuesday, May 24 – Friday, May 27 for the NAIA National Tournament.