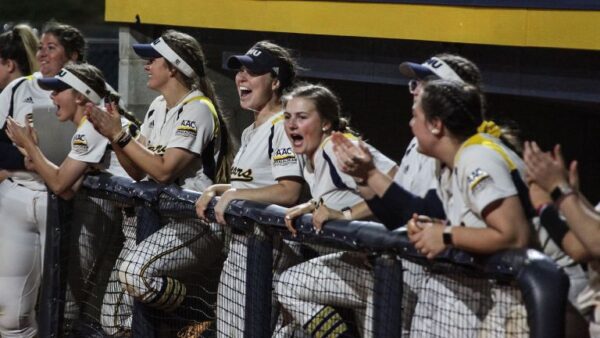 (CLEVELAND) – The No. 20 Truett McConnell University softball team battled No. 8 Reinhardt University inside the TMU Softball Complex on Tuesday afternoon for an Appalachian Athletic Conference showdown. The Eagles took game one 3-1, but the Lady Bears came out on top in game two (5-4) in walk-off fashion. The Lady Bears now sit at 21-7, 14-2 to lead the AAC, while the Eagles rank third in the AAC standings with a record of 28-8, 12-4 AAC.

GAME ONE 1-3
After two scoreless and hitless innings, Reinhardt got up on the board first after a leadoff single to shallow left-center (0-1). The Eagles went on to add two more at the top of the fourth (0-3), while the Lady Bears scored their lone run in the bottom of the fifth. Katherine Kozlowski led off with a double to deep right-center and Mikayla Sullens singled to left to drive home Kozlowski (1-3). Reinhardt ultimately forced the Lady Bears to leave two on base and held TMU hitless and scoreless the rest of the way to clinch the game one win by two.

GAME TWO 5-4, WALK OFF
The Eagles carried over momentum into the first inning to score two runs right off the bat (0-2). After TMU executed a double play to hold Reinhardt scoreless at the top of the third, Kennington sparked the bottom half with a triple to deep right-center. Sara Sullivan’s batted ball to third base allowed Kennington to score (1-2), but it was the fourth inning that saw the Lady Bears get out front. After Lauren Barrett reached on a single, Sabrina Pestana Aguiar doubled to move Barrett to third. Ellie Abner followed up with a double of her own to score the go-ahead run for TMU (3-2). Neither team was capable of scoring in the fifth and sixth innings, which featured another double play by the Lady Bears, but it all came down to the seventh.

With two outs, Reinhardt hit a two RBI single (3-4) at the top of the seventh, but it was ultimately the Lady Bears who rose to the occasion in the bottom of the seventh. Kennington singled to short to reach base and the Eagles intentionally walked Briley Lawson to put runners on first and second for TMU. Mattie Brooks singled to shallow center, which drove home the tying run (4-4), but it was Kozlowski’s batted ball that forced a misplayed grounder, which allowed pinch runner Katie Carruth to score from second, to win the game in walk-off fashion (5-4).

BY THE NUMBERS
Overall, both teams accounted for a total of 11 hits. The Lady Bears were led by Abner, who went 2-for-3 with two RBIs. Barrett also went 2-for-3, while Kennington and Brooks went 2-for-4. Kennington led with two runs. Pitcher Karley Hobbs earned her 12th win of the year after tossing seven innings of 11 hits, four runs, two walks and three strikeouts.

UP NEXT
TMU will return to the TMU Softball Complex for two more AAC doubleheaders this week. First on the schedule is Bryan College on Thursday, Apr. 1, at 3:00 p.m., and then Columbia College on Saturday, Apr. 3, at 1:00 p.m.