No. 20 Lady Bears split at Brenau after 10-inning game two 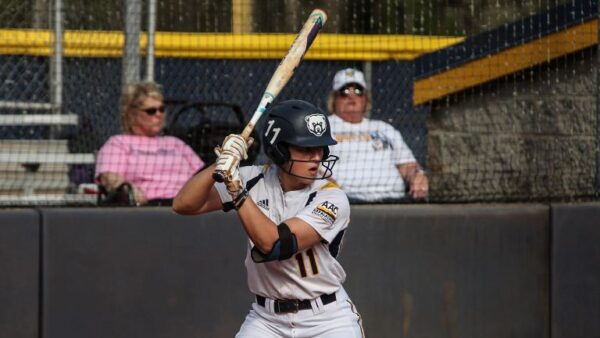 (GAINESVILLE) – The No. 20 Truett McConnell University softball team split with Appalachian Athletic Conference foe Brenau University on Tuesday evening. The Lady Bears took game one 10-7 and dropped game two (2-1) by a walk-off in 10 innings, which puts TMU at 24-8, 17-3 AAC and Brenau at 9-9, 6-6 AAC on the year.

GAME ONE 10-7
Three back-to-back singles from Justine Kennington, Sara Sullivan and Briley Lawson, allowed the Lady Bears to get up on the board right off the bat in the first (1-0). Mattie Brooks followed up with a single up the middle to drive home Sullivan (2-0) and Brooks ran home on a fielder’s choice to immediately give the Lady Bears a three-run advantage (3-0). The Golden Tigers scored two runs of their own in the bottom of the first (3-2), but once again, a leadoff single, from Alicia Price, fueled an explosive four-run inning for TMU, which featured a two-run homer from Katherine Kozlowski, in the second (7-2).

LEADERS
Overall, TMU recorded 15 hits to Brenau’s 12. Lawson led the way with four RBIs going 3-for-4. Kennington also had three hits (3-for-5) with three runs. Price and Kozlowski each went 2-for-3. Kozlowski had two RBIs, while Price had two runs. Brooks also had two RBIs (2-for-4) and two runs. Kozlowski and Pestana Aguiar each recorded a homerun.

Pitcher Bethany Hyde made the start for TMU, while Ellie McCloy and Karley Hobbs relieved. Hobbs was credited the win after pitching three innings of four hits, zero earned runs, one walk and one strikeout.

GAME TWO 2-1 | 10 INNINGS
After two scoreless innings, Sullivan squeezed home Price with a bunt base hit at the top of the third (1-0). The top of the sixth saw Lauren Barrett single to right to score pinch runner Caroline Waters (2-0), but that would be the last time TMU scored the rest of the way. Brenau answered in the bottom of the sixth with a solo homerun (2-1) and tied it up in the bottom of the seventh on a two-out double (2-2), which forced the game into extra innings. TMU left one on base in the eighth and 10th innings but the Golden Tigers secured the win in the bottom of 10th on a walkoff sacrifice fly to right.

LEADERS
Barrett and Abner led the way going 2-for-4. Abner led with a double. Sullivan and Barrett led with one RBI apiece. Sullivan, Lawson, Brooks and Pestana Aguiar added one hit apiece.