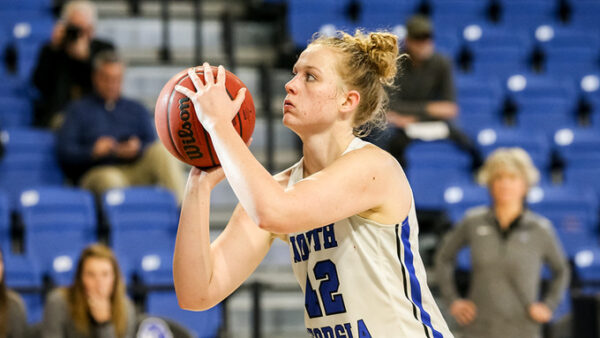 After the Saints took an early lead, the Nighthawks hit back-to-back threes to take a 10-6 lead midway through the first quarter. The UNG lead hovered in single digits until Flagler stormed back midway through the second period to take a five point lead, 34-29. North Georgia would then go on a 10-2 run to finish the half to lead by four at the break.

The game continued to go back-and-forth with the Nighthawks leading by as many as eight and trailing by two at multiple points in the fourth quarter. The Saints hit a three-pointer with 2:43 left to tie the game at 81 before North Georgia finished on an 8-0 run to earn the second win of the season.

NOTES
– Martin’s 23 points came on 7-of-14 shooting, including three shots from beyond the arc. Julianne Sutton finished with 20 points. Abby Hubert added 13, while Abbie Franklin finished an assist short of a double-double with 12 points and nine dimes.

– Sutton has now scored double figures in 37 straight outings, dating back to the run to the Elite Eight in the 2018-19 season. The senior has scored 20 or more points in 19 of the games in that streak, including four of the last six.

NEXT UP
The Nighthawks will open up inside the UNG Convocation Center on Wednesday, December 16, with a game against Carson-Newman. Tipoff is set for 3:30 p.m.