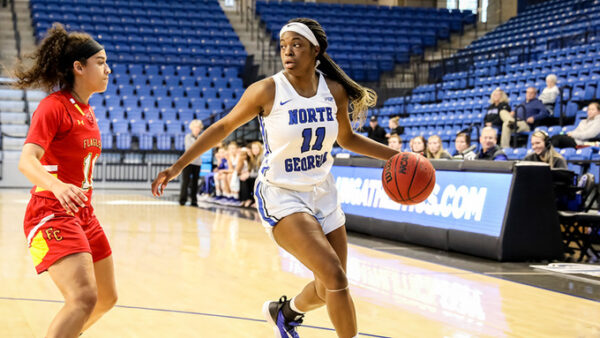 (AUGUSTA) – Five Nighthawks finished in double figures as the No. 16 University of North Georgia women’s basketball team held off a late rally from Augusta to win the season opener, 87-76, at Christenberry Fieldhouse Tuesday evening.

After the two teams traded leads in the early going, the Nighthawks went on a 25-3 run that spanned the end of the first and the beginning of the second quarter to push the UNG lead out to 23 points, 40-17. The Jags trimmed the lead to 15 by halftime and 11 early in the third quarter.

The margin floated between 10 and 15 points throughout the third quarter before North Georgia stretched the lead to 20 points with four minutes left in the fourth quarter. Augusta finished the game on an 11-2 run to bring the game to its final score.

NOTES
– Seniors Julianne Sutton and Abby Hubert each finished with a game high 22 points while freshman Caroline Martin started her collegiate career with 14 points. Abbie Franklin ended with 11 points, and Lacie McCoy added 10 off the bench.

– The Nighthawks netted their most points in a season opener since the 2013-14 season when UNG scored 90 against Piedmont. North Georgia has now won 14 straight season openers with the last opening loss coming in the 2006-07 season.

– North Georgia shot 50 percent from the floor and 26-for-30 from the free throw line.

NEXT UP
The Nighthawks will continue their non-conference matchups with a road trip to Flagler on Friday. Tipoff is slated for 1:30 p.m.