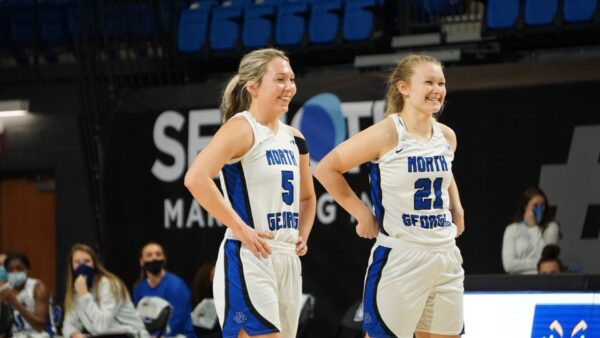 Clayton State held the early lead before UNG went on a 12-0 run to take a 22-10 lead late in the first quarter. The Lakers responded, tying the game up at 36-36 with three minutes to play in the first half before the Nighthawks retook the lead by four headed to the break.

North Georgia held a slim margin throughout most of the second half before the Lakers finished the fourth quarter on a 10-3 run to force overtime. Both teams traded buckets early in the overtime period, but the Nighthawks finished on a 13-3 run to close out the road win.

NOTES
– Martin finished 5-for-13 from the floor and 12-for-16 from the charity stripe. She also added eight rebounds.

– Julianne Sutton put up a double-double of 21 points and 12 boards. She added three assists, three blocks and three steals as well. Abbie Franklin had 19 points, Josie Earnhardt put up 12 and Abby Hubert finished with 10.

– The Nighthawks continued to share the ball Wednesday, finishing with 21 dimes on 32 made buckets.

NEXT UP
North Georgia will head over Blood Mountain to take on Young Harris Saturday with tipoff set for 3:30 p.m.