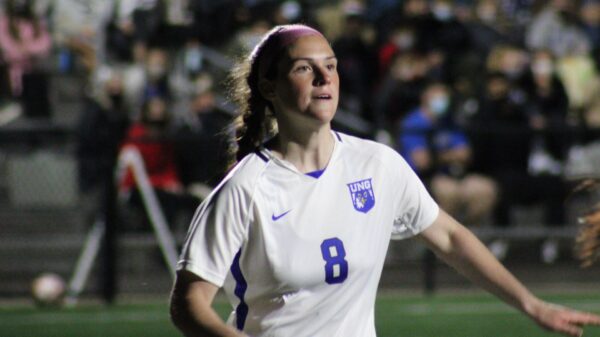 (AIKEN, S.C.) – The No. 12 University of North Georgia women’s soccer team got back on the winning track with a 1-0 win over USC Aiken Thursday evening.

After a scoreless first half that saw the Nighthawks outshoot the Pacers, 11-2, UNG finally broke through in the 77th minute when Abbie Crane sent a ball in to Katey Derkay who scored the game’s lone goal.

NOTES
– Derkay’s goal came on her fourth and final shot of the game. Two of her shots were on target. Brenley Townsend also had four shots on the night.

– Morgan Ramby was forced to make just one save on the night, coming in the 58th minute.

– The Nighthawks now hold a 14-match winning streak over USC Aiken, the second-longest active winning streak for UNG against any opponent. North Georgia has won 16 straight against Georgia Southwestern.

NEXT UP
UNG will host GSW in the regular season finale Sunday afternoon.