Nighthawks in Third After Two Rounds at the Mizuno Intercollegiate 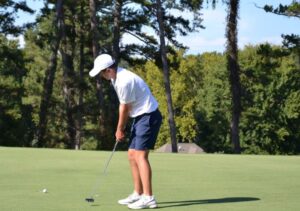 (GAINESVILLE) – The No. 6 University of North Georgia men’s golf team posted a two-over par 290 second round to finish the first day of the Mizuno Intercollegiate at the Chattahoochee Golf Club in sole possession of third place following the first day of competition.

Noah Zediker, Evan Thompson, and Gabe Larson lead the Nighthawks with a 36-hole total of 143 to place them tied for 11th.

Anderson is currently in first with a 16-under-par total, two strokes ahead of the second place No. 7 West Florida.

The third and final round is set to start at 9:00 a.m. on Tuesday at the Chattahoochee Golf Course in Gainesville.