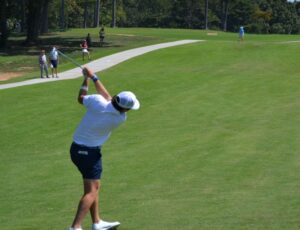 (GAINESVILLE) – The No. 6 University of North Georgia men’s golf team posted a five-under-par 283 final round to finish the Mizuno Intercollegiate at the Chattahoochee Golf Club in third place. The five-under was the lowest final round score in the 20-team event.

Noah Zediker led the Nighthawks in the event, carding a three-under-par 69 in the final round to finish tied for eighth. Zediker saved his best round for last after hooting a 72 and 71 in the first two rounds.

Evan Thompson and Will Chambless followed with a 54-hole total of 214, placing them tied for 10th. Stephen Kinsel, playing as an individual, also carded a final score of 214 to tie for 10th. Four UNG golfers placed in the top 10 in total, with Gabe Larson rounding out the top five for North Georgia.

The Nighthawks shot a 283 (-5) in the opening round before falling back slightly with a 290 (+2) in the second round. UNG returned for the third round and shot another 283 (-5) to finish the tournament in third at eight-under-par.

Anderson won the team title with an 18-under-par total, two strokes ahead of the second place No. 7 West Florida. West Florida’s Elias Havisto took home the individual title defeating Anderson’s Calahan Keever in the second hole of a playoff.