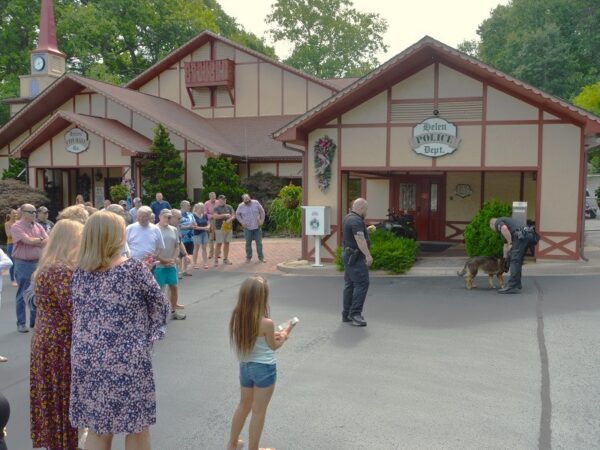 (Helen)-The Helen City Commission workshop started off with a celebratory tone Tuesday morning as the city recognized a room full of community merchants and residents who donated thousands of dollars to fund the city’s new police K-9 Unit.

Sgt. Chris Barrett explained more about how the canine unit was formed and how vital the community was to helping fund a unit that normally would cost $100,000.

“The commissioners were wanting to get a canine unit started based upon the community asking about it, wanting them to, and you know, the German Shepherds with the German theme of the town,” Barrett said. “And so, we had told him that we can get it started for minimal cost. And we wound up starting it for about $30,000 of donated money from the community, being the restaurants and citizens, costing the City of Helen, the government, nothing but the citizens which were mostly business owners, and a few residents. Mr. Bjorn Eichensberger, he’s the one who was our campaign sponsor to go around and meet with the restaurants. And Mr. Mervin Barbree also was one of our campaign guys. Barbree helped a lot with the equipment, finally getting all the equipment together – which is a lot of equipment for a canine unit. And we had the vet donation by Cleveland Veterinarian service. And the food is being donated by Honeybrook Catering.”

The donation of one of the dogs, Macho, was a major savings for the city. His handler Graylon Bryson said he is all work.

“My dog, he’s an old man,” Bryson said. “He’s been through it. He came from California, went to a prison system up in Pennsylvania, left the prison system and went to a police department. They retired him out and now we have him. He’s been certified since 2015 in all types of narcotics that we come in contact with here in the city.”

The second dog, Zora, was purchased with $9,000 of donations. Her handler, Officer Ben Vonier, says she is going to be amazing at her job.

“Zora, she’s a young dog,” Vonier said. But certainly, the kennel from which we purchased her is one of the premier in the country. I mean you couldn’t ask for a more eager, better trained, smart animal. She’s something else.”

Bryson and Barrett said the effectiveness of the unit cannot be overstated, nor can the lives it is saving in combination with officers carrying NARCAN in the battle against illegal drugs, including Fentanyl.

“In the last three weeks, I know I’ve deployed my dog 26 times, Bryson said. “Out of 26 times, I’ve found narcotics 24. To my knowledge, eight possibly nine arrests for methamphetamine. I think recently we had a heroin arrest with it. A lot of marijuana up here. A lot of pills. We’re saving about one life a week from Fentanyl.”

“I just got a Lifesaving Award yesterday,” Barrett said. “But also Sunday, we had an overdose at one of our local hotels, and the husband told us, ‘Be careful with that – that’s straight Fentanyl’. It wasn’t even heroin. It was straight Fentanyl, and they were snorting Fentanyl.”

For the critics out there, Barrett said Helen Police are following state law when using the K-9 units.

“The State of Georgia has a law that says that we have a free open air sniff and if I can articulate a reason, being the the personal indicators of a person and the vehicle indicators, all that together is called ARS was articulable reasonable suspicion,” Sgt. Barrett said. “Then I can ask for one of my canine handlers to walk around your car, or room in a hotel.”

Barrett and other Helen officers said they would prefer not to have to use the K-9 Unit at all, but that’s not reality – yet.

“The thing we’re shooting for here, is for when we’re recording drug deals on the telephones – because that’s how we work – is I want to hear, ‘I’ll meet you to sell your drugs, but I’m not meeting you in Helen’,” Barrett said. “That’s our goal. And we’ve succeeded that one time here. Now we’re going to do it again.”

Police Chief Aletha Barrett said in her 26 years of law enforcement she has never seen a K-9 unit come together as quickly as the one in Helen has, and she credits that to the $30,000 donated by local merchants and residents who want to see Helen remain a place families and friends come to enjoy.

Helen officers say they realized one thing immediately about the city where they work. It’s that they have the support of those around them.

“It’s staggering,” Vonier said. “No other agency I’ve ever worked at has had this sort of community support. It’s a pretty amazingly tight-knit community. I mean, just I’ve never seen such open cooperation between businesses and government agencies.”