New White County Board of Elections takes over county’s elections 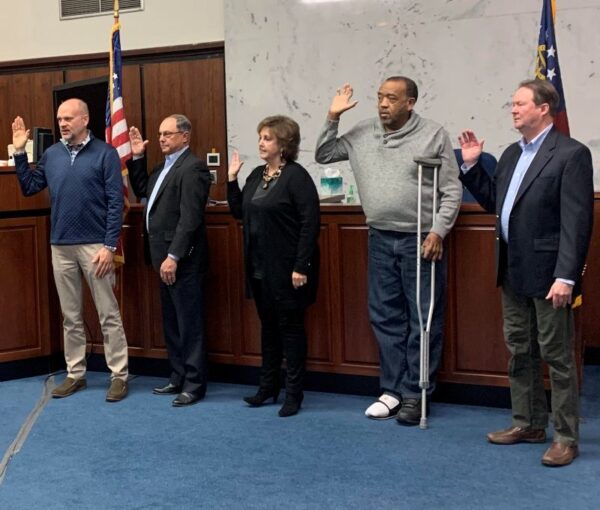 White County Clerk of Courts Deana Adams administers the oath of office to members of the newly-constituted White County Board of Elections and Registration. Shown, from left, are Todd Marks, Dwayne Turner, Louise Nix, Marlon Caldwell, and Russell Mobley.

(CLEVELAND) – As 2021 got underway with a runoff election for two U.S. Senate seats and one seat on the Georgia Public Service Commission, a newly-constituted board assumed responsibility for elections in White County.

Members of the new White County Board of Elections and Registration, appointed by county commissioners, were sworn in last week by Clerk of Courts Dena Adams.

Initially, two members of the board are serving two-year terms, while the remainder are serving four-year terms. In the future, all terms will be for four years of service.

The new board was established, effective Jan. 1, 2021, by Senate Bill 304 that was passed during the 2020 legislative session.

Under the legislation, Manning has been hired as elections superintendent and oversaw Tuesday’s runoff with the board assisting.

Members of the board include Marlon Caldwell, Todd Marks, Russell Mobley, Louise Nix, and Dwayne Turner.