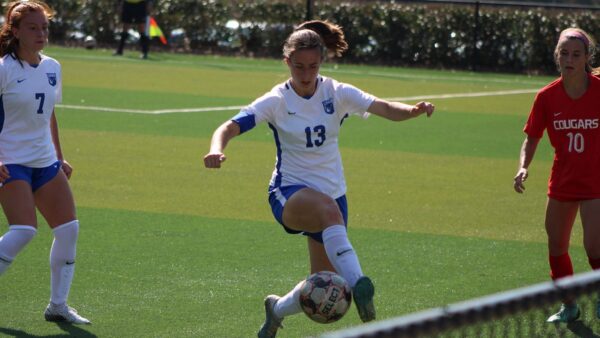 (INDIANAPOLIS – The NCAA has announced the 535 nominations for the 2021 Woman of the Year award, and University of North Georgia women’s soccer player Taylor Malasek is one of the nominees on the list.

Malasek, a senior from Peachtree City, Georgia, is a 2019 All-American and has been named All-Conference three times in her career. Additionally, she was named to the PBC Team of Academic Distinction three times so far in her career and has multiple academic awards at the regional and national level.

Established in 1991, the NCAA Woman of the Year award is rooted in Title IX and recognizes graduating female college athletes who have exhausted their NCAA eligibility and distinguished themselves in academics, athletics, service and leadership throughout their collegiate careers.

The NCAA encourages member schools to honor their top graduating female college athletes by nominating them for the Woman of the Year award. Schools can recognize two nominees if at least one is a woman of color or international student-athlete.

Next, conferences will select up to two nominees each from their pool of member school nominees. All nominees who compete in a sport not sponsored by their school’s primary conference, as well as associate conference nominees and independent nominees, will be considered by a selection committee. Then, the Woman of the Year selection committee, made up of representatives from the NCAA membership, will choose 10 women from each division to make up the Top 30.

The selection committee will determine the top three honorees in each division from the Top 30, and the nine finalists will be announced this fall. From those nine finalists, the NCAA Committee on Women’s Athletics will choose the 2021 NCAA Woman of the Year later this fall.