Helen – For the second time in as many years, areas of White County and Northeast Georgia have been the settings for a Lifetime Christmas movie, and the results of the most recent filming is set to air on Friday.

With the holidays upon us, the Lifetime Movie Network has begun 10 straight weeks of 24/7 holiday entertainment, and this Friday, A Taste Of Christmas premieres, a movie with scenes filmed in portions of White County.

The film is about a woman named Natalie who learns that her cousin will not be able to open her new Italian restaurant on Christmas Eve, but Natalie decides that by working together, they will make the opening happen.

The movie was filmed in 2019 in multiple areas around White County and throughout Northeast Georgia, including Sylvan Valley Lodge off Duncan Bridge Road, and in the cities of Helen and Dahlonega.  This is the second movie spotlight placed on White County, as Helen and Unicoi State Park were featured in another Lifetime movie titled Christmas Love Letter, which aired on the Lifetime Movie Network in December of 2019.

White County Chamber of Commerce President Beth Truelove said filming went smoothly, and “The movies that we have already filmed and that have been produced in White County really fit the feel of our entire community.”

So, mark your spot on the couch, get your cup of cocoa ready, A Taste of Christmas will debut on Lifetime on Friday at 8 p.m. The Lifetime Movie Network on Windstream is channel 380.

The movie will have several encore airings at the following times: 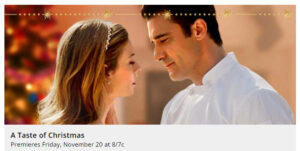