Lady Bears run away with AAC win over Koalas 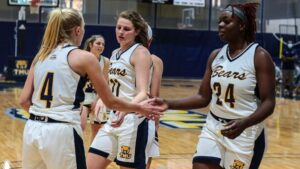 (CLEVELAND) – The Truett McConnell University women’s basketball team avoided the season sweep with Columbia College on Saturday inside the Benjamin F. Brady Arena with a big Appalachian Athletic Conference win over the Fighting Koalas (73-58). Last time they met, the Koalas came out on top in Columbia (69-61). TMU improved to 6-10, 3-10 AAC on the season, while Columbia fell to 6-6, 6-6 AAC.

Both teams went neck and neck throughout the first 10 minutes of the game but Jessica Jackson’s last second 3-pointer to close the quarter (17-13) allowed TMU to gain enough momentum to lead by as much as nine in the second quarter. In fact, Re’Tavia Floyd’s bucket in the paint at the buzzer allowed the Lady Bears a nine-point advantage at the half (37-28).

The Koalas fought in the third to get back within as little as two but Brenna Tate gave the Lady Bears their first double-digit lead with a 3-pointer from the corner (50-40) and it was up from there. The Lady Bears got out front by as much as 18 in the fourth, which ultimately proved to put the game out of reach for the visiting Koalas.