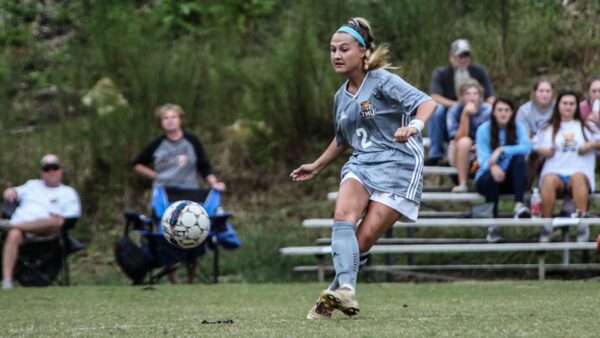 (COLUMBIA, S.C.) – For the fifth game in a row, the Truett McConnell University women’s soccer team shuts out their Appalachian Athletic Conference opponent. The Lady Bears blanked Columbia International University 2-0 on Wednesday evening on the road to record their sixth straight win to improve to 6-0-1, 6-0-1 AAC on the season.

TMU dominated possession as they took five shots before the first goal, which was shot by sophomore Ashleigh Smitherman and assisted by Hope Kenney in the 24th minute (1-0), while CIU took none. In fact, the Lady Bears held the Rams to zero shots, in comparison to TMU’s 10, throughout the entire first period.

Nonetheless, the Lady Bears picked up the pace in the second half recording a total of 18 shots, while CIU was only capable of shooting twice. Madison Wright forced CIU’s keeper to make a handful of impressive saves at the start of the second half before the sophomore found the back of the net in the 60th minute to give the Lady Bears a 2-goal advantage (2-0). CIU’s two total shots did not take place until the final six minutes of regulation, which ultimately proved the game to be out of reach as TMU clinched their sixth straight win.

Most notable, the team currently ranks second in the NAIA for total shutouts (6) and seventh in shutouts per game (.830). Individually, League ranks 11th in total assists (4) and in total game winning goals (2).

The Lady Bears will return home to the TMU Soccer/Lacrosse Complex on Saturday, Oct. 17, to host Milligan University at 5:00 p.m.