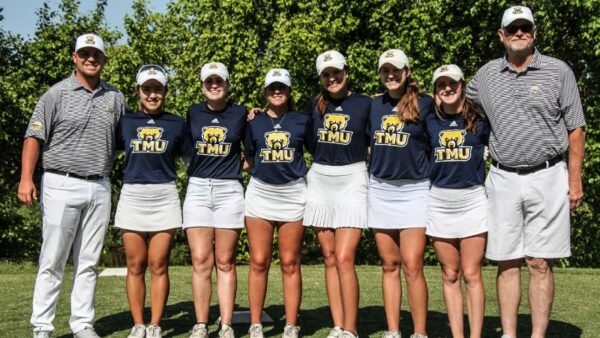 (Oklahoma, City)- On Friday, May 27, the No. 21 Truett McConnell University women’s golf team wrapped up the final day of the Women’s Golf NAIA National Tournament in Oklahoma City, Oklahoma at the Lincoln Park Golf Club. The Lady Bears finished round two in fifth overall to make the cut for the final day of competition and showed their grit in round three to record finish seventh overall out of 30 teams with a team score of 899.

“Words cannot express the excitement our team feels about accomplishing so many of our goals we had this season,” said Head Coach Steve Patton. “Our first goal started with earning a spot ranked in the NAIA Top 25. Our second goal was winning the AAC Tournament, along with making it to the Women’s Golf NAIA National Championships. Our fourth goal was to make the cut by finishing round two in the top 17 teams to make it to the finals, and our last pir in the sky goal was to finish in the top 10 overall. What is so cool is that every girl contributed. It is easy to think that one girl contributed more than another, but it truly took all five to reach our goals.”

The Lady Bears had a historic season, starting with the Point University Invitational where they placed first overall with a score of 631. Four golfers finished in the top five and were placed on the all-tournament team, which is the most in school history. At the Roadrunner Invitational, TMU secured a fourth-place finish with a team score of 926. The Lady Bears broke the one-day, two-day and three-day team record by shooting a 299, 300, 327.

“Dreams came true this week! We had the goals to continue to improve this year and we accomplished those goals together,” said Team Leader Madsion Panter.