Lady Bears fall behind against TWU 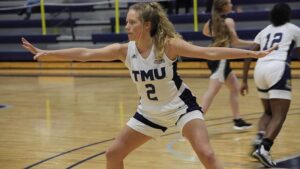 (ATHENS, Tenn.)- The Truett McConnell University women’s basketball team traveled to face Appalachian Athletic Conference competitor, Tennessee Wesleyan University, where the Lady Bears battled but fell to the Bulldogs with a final score of 65-56. TMU fell to a record of 9-8, 6-6 AAC, while TWU rose to a record of 11-3, 10-2 AAC.

The Lady Bears were hot at the start, featuring three consecutive shots from the three-point arc by Jessica Jackson, Sydnie Smith and RaTavia Floyd (8-0). The Bulldogs fought back, evening the score 15-15, but TMU responded immediately with a shot in the paint from Alysee Dobbs, followed by a jump shot from Camilla Callihan (19-15). The majority of second quarter saw the Lady Bears with the lead, until the Bulldogs gained speed to steal the lead going into the half (30-31).

TWU entered the third quarter with momentum, forcing the Lady Bears to work hard from behind (39-45). In the fourth and final quarter, two shots from Jackson bridged the gap (51-51), but the Bulldogs were not backing down as they served TMU a 56-65 loss.

Jackson led with 10 points and went 3-3 at the free throw line, while Floyd recorded 10 points of her own. Smith had eight points, followed by Sydney Rumble who had seven points and five rebounds. Natalie Nixon, Quan Holton and Callihan had five points apiece, while Dobbs had four points and Kacie Williams had two points.

The Bears are inside the Benjamin F. Brady Arena on Saturday, Jan. 15, where they will face Toccoa Falls College at 2:00 p.m.