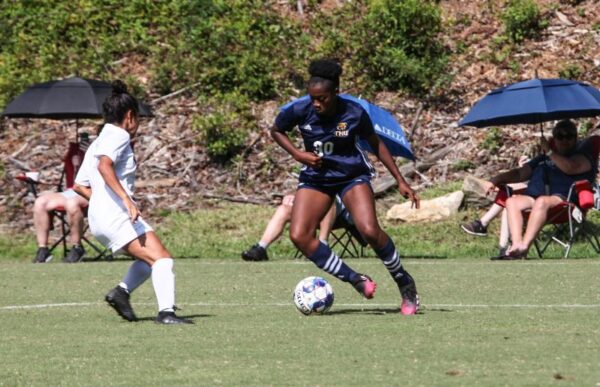 (CLEVELAND) – The Truett McConnell University women’s soccer matched up in Appalachian Athletic Conference play against Montreat College Satruday afternoon inside the TMU Soccer/Lacrosse Complex. The Lady Bears dominated in both halves to ultimately secure their first conference win with a final score of 5-0. TMU increased to a season record of 4-1, 1-0 AAC, while the Cavaliers declined to a record of 1-1, 0-1 AAC.

The first eight minutes of regulation saw TMU with speed on offense, capable of hitting the board first, after a perfect pass from Eliska Dvorakova found the foot of Hannah Logue (1-0). The Lady Bears continued to stay resilient on offense, recording 17 shots and six corner kicks by the end of the first half.

The Lady Bears gained momentum in the second half, with Logue finding the back of the net once again off a ball from Dvorakova in the 48th minute (2-0). Ashleigh Smitherman immediately followed with a goal of her own off another stellar assist by Dvorakova (3-0). A cornerkick by Nadia Basto in the 72th minute, resulted in a perfect header by Makenzie Hoyt for goal number four (4-0). The game was ultimately put out of reach in the 78th minute when Lindsey Fowler recorded a goal of her own, with an assist by Ruffa Meger, resulting in a final score of 5-0.

Overall, the Lady Bears outshot the Cavaliers 34-3, 19 on goal, along with 14 corner kicks, opposed to Montreat’s three.

Freshman goalie Emelie Taylor made her debut as a Lady Bear recording one save, while senior goalie Victoria Moore tallied one save of her own.

The Lady Bears will be back inside the TMU Soccer/Lacrosse Complex to face AAC foe, Point University, Wednesday, September 15, for their first game under the lights. Kickoff at 5:00 p.m.