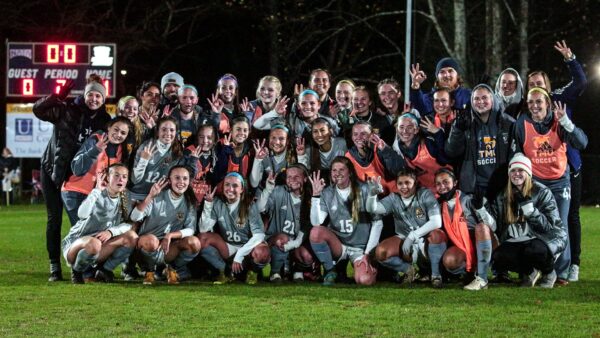 (CLEVELAND) – The Truett McConnell University women’s soccer team clinched the title of Appalachian Athletic Conference Regular Season Champions for the third year in a row, the first team to do so in TMU history, Tuesday night after besting Brenau University with a final score of 1-0. The Lady Bears finished the regular season with a record of 11-0-1, 11-0-1 AAC, featuring an 11-game win streak, while the Golden Tigers fell 6-6-1, 6-6-1 AAC.

The Lady Bears dominated on the visiting team’s side of the field in period one with four shots and five corner kicks, while forcing Brenau to work on defense, unable to take a single shot of their own. The score remained 0-0 into the second half, but the Lady Bears continued to show their resilience by taking 11 more shots, featuring two that bounced off the crossbar, and earning four more corner kicks. In the 83rd minute of the game, freshman Natalie Alamri found the back of the net off a cross to the box from sophomore Kristin Beasley, giving TMU the advantage they needed to secure the win (1-0).

The Lady Bears in fact out shot Brenau 15-3, along with earning a total of nine corner kicks, while prohibiting the Golden Tigers from earning a single one.

“I am running out of words, superlatives to describe this team. But I am definitely not running out of belief,” said Head Coach David McDowell. “All season they have been absolutely superb. Every day in practice they are always excellent and every game they are excellent.”

“For the past three years in regular conference play this team has recorded a 36-1-1 record. I think that says enough about the level this team plays at. To be this consistent, takes so much character, perseverance and desire. They are absolute mentality rock stars and I am so proud to be their coach.”

Alamri led the Lady Bears with two shots on goal and one goal, followed by sophomore Madison Wright who had four shots, one on goal. Sophomore Ashleigh Smitherman had three shots of her own, while Beasley tallied a single assist. Individually, junior Sydney League, sophomores Lyndsey Darden, Lauren Bergevine, Makenzie Hoyt, freshmen Brianna Hernandez and Hope Kenney had a shot a piece, while freshman goalie Addy Galason had one save on the day, totaling 27 on the season.