Julianne Sutton Nominated for NCAA Woman of the Year 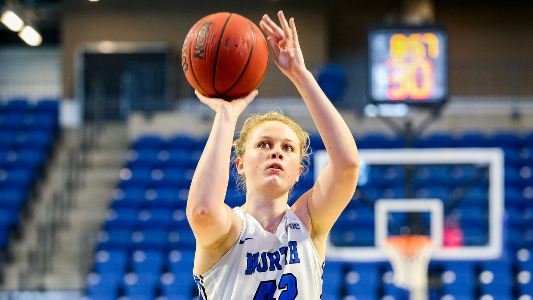 INDIANAPOLIS – A record 605 female college athletes have been nominated by NCAA member schools for the 2020 NCAA Woman of the Year award, and University of North Georgia women’s basketball player Julianne Sutton is one of the athletes.

A rising senior from Flowery Branch, Georgia, Sutton was named the Peach Belt Conference Player of the Year after leading the Nighthawks to a third-straight NCAA Southeast Regional appearance. She was named a WBCA All-American Honorable Mention as well as earning a spot on the CoSIDA Academic All-District Team. This past season, she scored her 1,000th career point and pulled down her 500th career rebound.

Next, conference offices will select up to two nominees from their pool of member school nominees. The Peach Belt pool consists of nine student-athletes. Then, the Woman of the Year selection committee, made up of representatives from the NCAA membership, will choose the Top 30 honorees, 10 from each division. From the Top 30, the selection committee will determine the top three honorees in each division and announce nine finalists. The NCAA Committee on Women’s Athletics will then choose the 2020 NCAA Woman of the Year, who will be named this fall.

Rooted in Title IX, the NCAA Woman of the Year Award was established in 1991 to recognize graduating female student-athletes who have exhausted their eligibility and distinguished themselves in academics, athletics, service, and leadership throughout their collegiate careers.