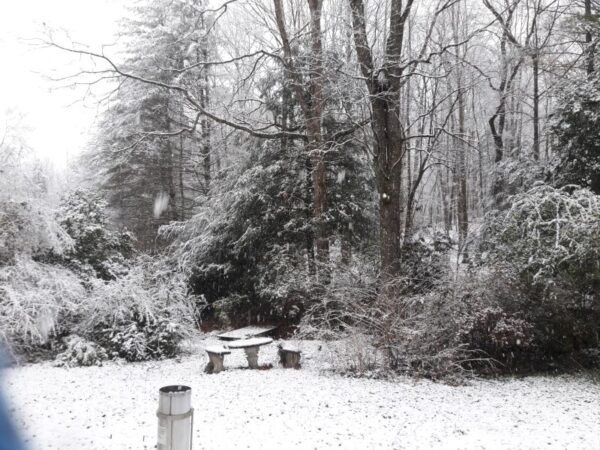 By Bill Kinsland, WRWH Weather Reporter
(Sautee)- White County’s weather records cover nearly 79 years, starting in 1943 with our first US Weather Bureau Observer at Cleveland, Ms. Estaline Sutton. Four other stations were subsequently established at Helen, Sautee, Robertstown and Unicoi State Park. Today, three of those stations still survive at Cleveland, Sautee and Helen.
and report weather daily to the National Weather Service.
–
– Reviewing our records, it was found that January is, by far, our snowiest month. Since 1943, 60 January snow events have been recorded. The heaviest single-day snowfall was 16.0 inches recorded at Helen Police Department on January 6,1988….a record amount not only for January but for the entire 79 years of record-keeping.
–
-Shortly afterward, the second highest 24-hour snowfall of 12.0 inches was recorded at Cleveland on January 8, 1988 by Observer Ms. Doyle Sutton. These record snowfalls are made all the more remarkable when compared to the county’s average normal January snowfall is only 0.8 inch!
–
-Since 1988, our snowfall has diminished in both frequency and amounts. Currently, we have had no January snowfall in four years, the last such snowfall having occurred in January, 2018.
–
-Given the current forecast for a possible snow event this upcoming weekend, there is a possibility that we may end this “dry spell”!
Click the link below to check out all the January snow events in White County.
JANUARY SNOW EVENTS
Views: 2,202