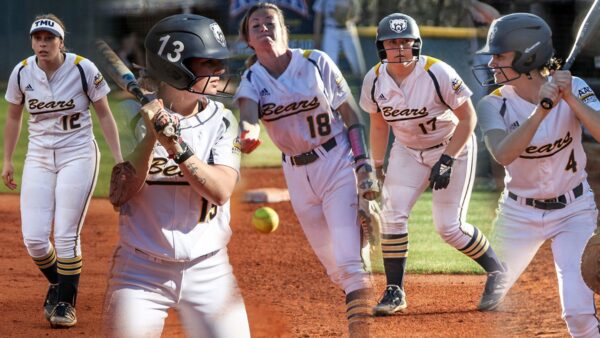 (CLEVELAND) – The Appalachian Athletic Conference announced softball’s postseason awards on Monday and five members of the No. 22 Truett McConnell University softball team (28-12, 21-5) were listed, which is the most of any AAC team. Most notable, Karley Hobbs was named the AAC Pitcher of the Year for the third consecutive year, while Lauren Barrett was named the AAC Freshman of the Year.

COACH’S COMMENTS
I am so proud of these student athletes,” Head Coach Jenni Shepard said. “They work so hard every day and have performed at a high level throughout the season. I know they are proud of the fruits of their labor and are excited to celebrate their accomplishments so far this season. Excited to start the conference tourney tomorrow and nationals in a couple of weeks cause the Bears are not done yet!”

HOBBS, BARNETT NUMBERS
Hobbs finished the regular season leading the Lady Bears’ pitching staff with an overall record of 17-5 (13-2 AAC) and led the AAC with an earned run average of 1.05. The redshirt junior also ranked second, right behind teammate Bethany Hyde (.177), in the AAC for opponent batting average with a .196. The three-time AAC pitcher of the year struck out a total of 60 batters in conference play with an average of 4.48 strikeouts per game, which ranks sixth in the AAC. Earlier in April, Hobbs pitched her third career no-hitter against Columbia College.

Barrett made her debut as a Lady Bear individually ranking second in the AAC with a conference batting average of 0.500 and a conference slugging percentage of .708, which ranks fourth in the AAC. The freshman accumulated a total of 36 hits with an average of 1.44 hits per game through 26 conference games, which are both the eighth best in the AAC. Barrett also recorded a total of six RBIs, with an average of 1.00 per game, and ranked fifth in the AAC with a total of four homeruns. Barrett’s on base percentage of .520 ranks third best in the AAC. The freshman outfielder also tallied a total of six doubles and scored 25 runs. Barrett claimed her first career AAC player of the week nod after hitting two homeruns in a single game. Lastly, Barrett had three perfect outings at the plate (3-for-3) on the year.

FIRST TEAMERS BY THE NUMBERS
Also joining Hobbs and Barrett on the All-Conference First Team is Briley Lawson and Mattie Brooks. Lawson, the 2019 AAC Freshman of the Year, finished her second complete season with TMU with an AAC batting average of .393 (.405 overall) and a slugging percentage of .607. Like Barrett, Lawson also recorded a total of 26 RBIs four homeruns through 26 conference games. The redshirt sophomore accumulated a total of 33 hits with two doubles and scored 13 runs. Lawson recorded a single game high of four RBIs twice this season against Columbia International and Brenau University.

Brooks finished her complete season with TMU with the fourth best batting average in the AAC with .482 (.423 overall) and with the ninth best slugging percentage with .663. The redshirt freshman ranked fourth in the AAC with a total of 40 hits and average of 1.54 hits per game. Through 26 conference games, Brooks tallied a total of 25 runs, 22 RBIs, nine doubles and two homeruns. The middle infielder’s on base percentage of .500 ranks sixth in the AAC. Brooks’ season best took place against Tennessee Wesleyan in March when she went 4-for-4 at the plate with three runs, one RBI and one double. Brooks recorded a single game high of four RBIs twice against Montreat and Union.

PRICE, SECOND TEAM
Alicia Price earned a spot on the All-Conference second team. The redshirt junior recorded a batting average of .358 and slugging percentage of .396 through 24 conference games. Price accumulated a total of 19 hits, seven RBIs, two doubles and scored 14 runs. The third baseman had a season single game high of three RBIs against St. Andrews University and three hits twice against Kentucky Christian and SAU.

Following the conference tournament, TMU will look to compete in the NAIA National Championship Opening Round for the third consecutive season on Monday, May 17 – Wednesday, March 19.