Helen to the Atlantic Balloon Race & Festival is underway 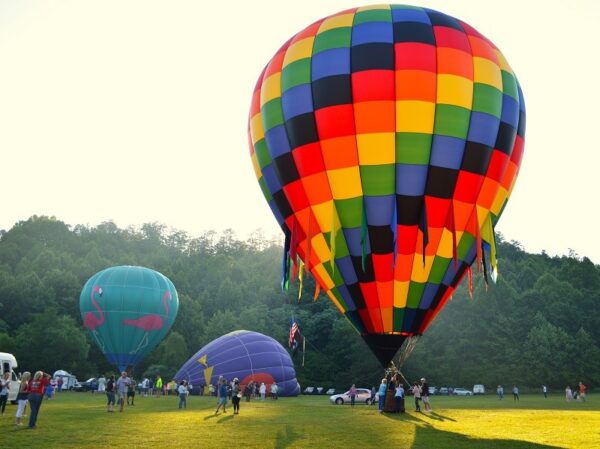 In its 49th year, the Helen to the Atlantic Balloon Race & Festival is the South’s oldest balloon event.

The race winner is the first person to cross I-95, or whoever is ahead at sunset Friday, June 3.

But not all the nearly 20 balloons that inflated and lifted off are headed to the coast. Many fly locally to promote Helen – Georgia’s Alpine Village.

Craig McDonald is a Helen original when it comes to the sport of ballooning. He got his start in the sport when the first couple of hot air balloons were introduced to the town.

“I’ve been around ballooning since 1972, when Pete Hodkinson and Lanier Chambers bought balloons to kind of get things started here, and I started out crewing, helping them a little bit,” McDonald said. “And then Tarp Head started the same way I did, and then he ended up manufacturing balloons. And I kept a balloon of my own up until probably 10 years ago. So, I’ve flown up here for 40 years, but it was just time for me to kind of retire.”

The race begins in Helen and the finish line is Interstate 95, anywhere between Maine and Miami. The shortest distance is 225 miles, and the race usually takes two days.

Thursday morning’s weather was ideal for the race and the local mass ascension.

“I think that’s a good direction that first balloon Jonathan Wright from Albuquerque took off,” McDonald said. “That’s always a good direction. So, it’s not toward any national forest or any kind of danger or anything. Should be a lot of open fields and good landing spots.”

“He probably will fly until lunchtime,” McDonald said. “Because he’s solo and he’s going all the way to the coast, he’ll drop down and refuel and then try to make it on to the coast one day if he can.”

The race becomes a crew event as well since the balloons are limited to 40 gallons of propane – enough to last approximately four hours. If crews are not there to refuel the balloon quickly once it lands, valuable time is lost.

McDonald says the use of a single launch location has quantified the balloon festival event for Helen.

“I think when we started using this field that was donated by the Wilkinses, it put all the balloons together in one spot,” McDonald said. “For years, Helen started building up and there’d be two or three balloons on one little patch of grass and two or three on others. We can all be here and on the other side of the creek there’s plenty of room for spectators. Before, you could not tell what kind of crowd you had. And this is a really big event that a lot of people come out and support it.”

Balloonists not competing in the race will participate in local events at 6 p.m. Thursday, and around 7:30 a.m. and 6 p.m. Friday and Saturday, weather permitting. Balloons will only fly for one to two hours, and there are no ballooning activities during the middle of the day.

There is a $5 parking fee (supporting local non-profit organizations) for those visiting Wilkins Field off Bruckenstrasse in Helen to view the balloons, and there are opportunities for the public to assist with the inflation of the balloons or be part of a chase crew that follows the balloon.

The Helendorf River Inn serves as host and headquarters for the event, as it has since 1974. Those planning to drive into town to see balloons should call Balloon Headquarters at (706) 878-2271 to make sure it is not raining or too windy for balloons to fly.