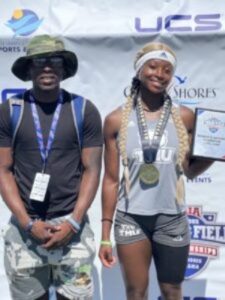 Hall opened the event with a mark of 3.34m and recorded the winning mark on her third jump, which ultimately sealed the victory. The next closest mark was from Indiana Tech at 6.14m.

The true freshman was a force to be reckoned with in the regular season and was a key contributor to the women’s track & field historical 2022 season. She recorded three first place finishes in Triple Jump (Life University Invitational, Susan Rouse Invitational, Emory Spring Opener) and three first place finishes in Long Jump (Emory Spring Opener, “Thrills in the Hills”, Appalachian Athletic Conference Tournament), while setting multiple personal and team records throughout the season.

Sara Sullivan is the Director of Athletic Marketing and Communications for the Truett McConnell University Bears.