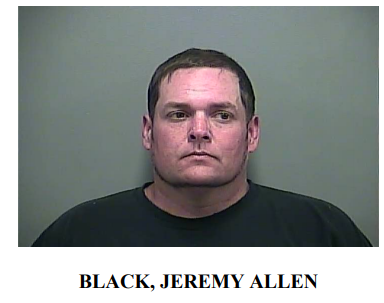 (Cleveland)- The April term of the White County Grand Jury met again last week and addressed 34 bills of indictment presented before them with 33 being true billed and 1 was no-billed.  The Grand Jury made their presentments before the Honorable T. Buckley Levins on July 12th.

Among those indicted was 41-year old Jeremy Black of Cleveland. He was indicted on Involuntary Manslaughter, criminal attempts to commit a misdemeanor, criminal trespass, and possession of tools for the commission of crime.

According to the White County Sheriff’s office, Black was present when officers were dispatched to 109 Becky Drive in Cleveland at 4:42 AM on June 27 where 48-year-old Bruce Jeffery Reaves of Mableton was found under a vehicle at the business.

Sheriff’s Capt. Clay Hammond said in an email, investigators believe that Reeves had been cutting on the vehicle’s exhaust when the vehicle fell. Reeves died of his injuries.

Black was arrested on July 14th and remains in the White County Detention Center.