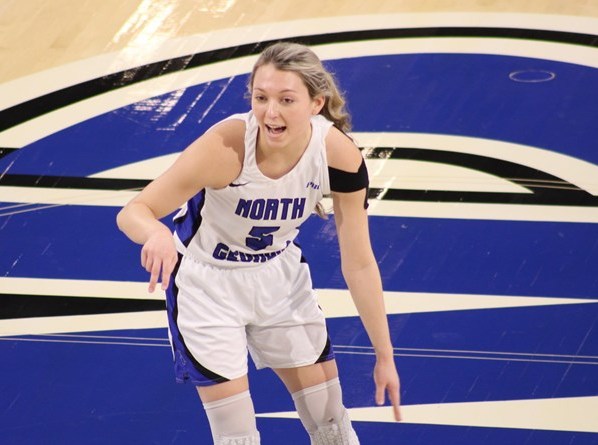 (YOUNG HARRIS). – With her third and final assist of the night, Abbie Franklin became the University of North Georgia women’s basketball NCAA career leader in assists as the No. 12 Nighthawks defeated Young Harris, 83-63, Saturday afternoon.

The Mountain Lions took a 3-1 lead on a Niaya White three-pointer early in the first quarter, but North Georgia went on a 7-0 run to take the lead for good. The Nighthawks went on a 9-0 run across the first and second quarter break that extended the lead to 16 before holding a 19 point lead at the half.

The Nighthawks saw their lead grow to as many as 26 points before the game ended.

NOTES
– While she finished with just six points, Franklin passed Stephanie Huffman for the NCAA-era career assist record. The senior from Homer now has 378 career dimes. She also now sits at 205 three pointers, one off the career record at UNG currently held by Molly Rainwater.

– Julianne Sutton ended with a game high 22 points, while Lacie McCoy came off the bench for 15 points. Caroline Martin added 13 and Abby Hubert put up 12.

NEXT UP
The Nighthawks will host Augusta on Monday with tipoff set for 5:30 p.m.