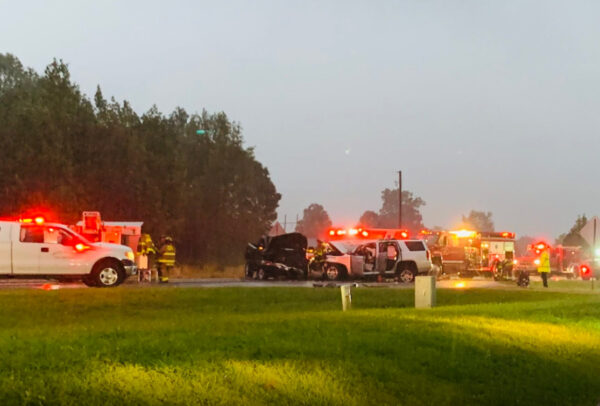 (Cleveland)- A head-on collision on U.S. 129 south of Cleveland Thursday evening injured a Clermont mother and her two children. The wreck also injured the driver of a pickup truck who troopers say caused the crash.

SFC D. A. Rathel with the Georgia State Patrol post in Gainesville said in an email, the accident happened around 6 p.m. just north of Marvin Miles Road near the Hall/White County line.

Troopers say Michael Anthony Parris, Jr., of Cleveland, was traveling north in a Chevrolet Silverado pickup when he crossed the centerline. The truck struck a southbound Chevrolet Tahoe, driven by 38-year-old Candice Bennet Nanney of Clermont.

According to the GSP,  Nanney’s 14-year-old daughter, Katie, and her 2-year-old son, Cameron, were riding in the vehicle with her. The teen girl who was a front-seat passenger sustained serious injuries. Emergency crews transported her to Children’s Hospital of Atlanta. The toddler was riding in the back seat and sustained a minor injury to his forehead.

Both drivers suffered visible but non-life-threatening injuries, according to troopers. Emergency Medical Service personnel transported all three of them to Northeast Georgia Medical Center in Gainesville for treatment.

The trooper investigating the crash noted he suspected Parris was tired and may have fallen asleep behind the wheel but noted, “DUI is not a factor in this crash.”  The trooper charged Parris with failure to maintain lane.