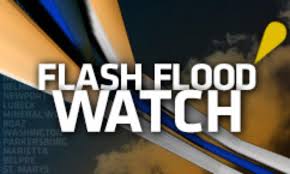 Waves of moderate to locally heavy rainfall are expected during this time. Soils are already saturated and additional rainfall, even lighter amounts, will only worsen runoff. Additional rainfall amounts of one to two inches are possible through the remainder of the day.

The axis of heavier rainfall is expected to shift northward overnight and Tuesday with additional rainfall amounts of one to three inches possible. Locally higher amounts, especially across the higher terrain of north Georgia, are also possible.

A Flash Flood Watch means that conditions may develop that lead to flash flooding. You should monitor later forecasts and be prepared to take action should Flash Flood Warnings be issued.