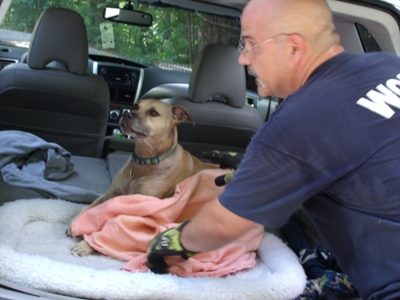 It was an animal rescue rather than a human White County emergency personnel had to deal with Thursday afternoon at  Dukes Creek Falls in the  Northern part of the county.  The call received by 9-1-1 dispatch at first was not clear if  it was a person or dog, due to the lack of cell phone coverage.  It turned out to be a dog that fell from the overlook at the popular  falls located off Richard Russell Highway.

Vinnie Valentino  the brother of the dogs owner,   said he and his sister are vacationing in the area and wanted to check out some of the local trails and  came up on Dukes Creek and decided to make the hike to the falls with her  dog named Sahara.

He said they really don’t know how it happened, “ my sister and I got separated, I had walked out to one end of the overlook and she was at the other end and all of a sudden we hear the dog screaming.  Had to look around a bit but finally saw the dog down on the rocks, said Valentino.

Fire department personnel used a wheeled stokes basket to help get the dog out.  The dog was taken to by private vehicle to Mount  Yonah Animal Hospital in Cleveland for treatment of injuries, which is believed to include a broken front leg.