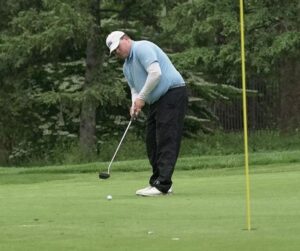 (DEARBORN, Mich.) – University of North Georgia men’s golfer Grant Crowell shot a final round 71 as the No. 4 Nighthawks climbed two spots to 11th in the final round of the 2022 NCAA Division II Men’s Golf National Championships on a rainy Wednesday at TPC Michigan.

Crowell finished in a tie for 11th place individually in the program’s first appearance at the national finals. He had five birdies on the day, including four on the front nine. Crowell finished at 5-over for the week.

The Nighthawks shot the second best round of the day at 7-over, finishing just three shots outside of the top 10. Central Missouri claimed the top seed in the medal match play portion of the event, while MIssouri-St. Louis’s Joel Sylven won the individual national championship in a one hole playoff.

Evan Thompson also earned a top 30 finish, ending in a tie for 29th place at 10-over after shooting even-par in the final round.