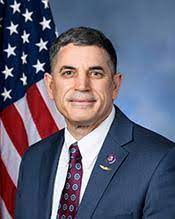 (Washington)- On Thursday Ninth District Congressman Andrew Clyde released a statement after casting a no vote against House Resolution 6119, a Continuing Resolution that would extend government funding through February 18th.  The resolution ultimately passed the House by a vote of 221-212.

In his statement, Clyde said, “Ignoring fiscal responsibility, for months Democrats have foolishly prioritized advancing their radical agenda instead of effectively addressing government funding. Due to their inability to govern, House Democrats scrambled to cobble together this stop-gap funding bill that simply puts Congress back in the same problematic situation in two months’ time – serving as yet another distraction from the Biden Administration’s myriad of crises.”

On Wednesday, Rep. Clyde joined his House Freedom Caucus colleagues in sending a letter to Senate Minority Leader Mitch McConnell urging him and Senate Republicans to stand strong against the continuing resolution unless it blocks funding for President Biden’s vaccine mandates.