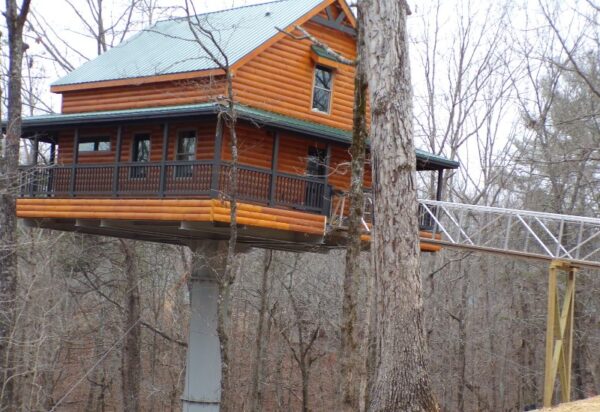 (Cleveland)- The White County Board of Commissioners have taken action to help to improve the safety of a unique and popular rental cabin in the county.

Back in March firefighters responded to a fire in a “pedestal” or tree house type rental cabin at 184 Walnut Ridge Drive.

No injuries were reported in the fire that started in the back of the home and all occupants got out safely from a front entry and exit ramp.

According to White County Commission Chairman Travis Turner, things could have been much worse, since the structure had only one entrance and exit and the height on the back of the structure is around 70 feet, “that in itself is a danger, it’s with that we recognize while it may have met some codes it didn’t meet common sense,”  said Turner.

The commissioners at a meeting Monday adopted a resolution that would add to the current building code a requirement that would require such structures have a second exit.  The county must go through a process of submitting an amendment to the building code to the Georgia Department of Community Affairs for their approval before the county can make such changes locally.

John Sell County Community and Economic Development Director told the commissioners he and other county officials met with the builder of those homes on Monday and that he has agreed to construct a second way in and out from those structures and he has plans to build two more and will include the second exit when building those.