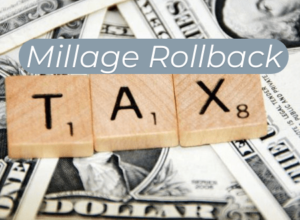 (Cleveland)- Now that officials have more data on the county tax digest it looks like county property owners will not be seeing an increase in their tax millage rate this year.

The White County Board of Commissioners was set to advertise a three-quarter mill rolling back, but at the end of Monday’s commission meeting Commissioner Terry Goodger said he would like to see a full rollback to 9.505 mills.  The other commissioners generally agreed, but they will be waiting until a called meeting set for this Thursday to make that decision final.

Commissioner Goodger said that even with the full rollback the county will still have 2.3 months of fund balance to work with, possibly three following the county audit.

The Cleveland City Council also talked about the upcoming tax millage rate. During their meeting, last night City Administrator Kevin Harris said they will be advertising this week a partial rollback for the city tax millage of .446 mill.  Harris said that they don’t have as many fund resources as the county and school board so they could do a full rollback.

Even with that said, he told the council that it is the biggest rollback for the city in years.  Harris said more than 10 years of rollbacks would not equal this one-time rollback.

Since it isn’t a full rollback the city is required to hold three public hearings on the millage rate.  The first of those hearings will be held Monday, August 15th at 6:30 PM with another hearing on August 23rd 9 AM and again that day at 6:30 PM.

Last week the White County Board of Education talked about a full rollback of the education tax this year. They are expected to vote on that during their meeting August 23rd.