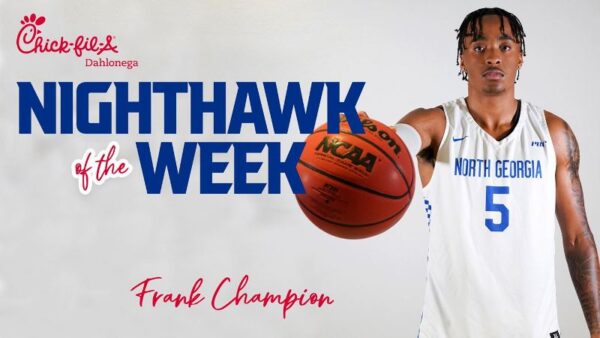 Champion put up 22 points and six rebounds per contest last week in the Ross Morkem Memorial, leading the Nighthawks to a 1-1 week. He scored a game-high 30 points Saturday in the win over No. 24 Lee, shooting 14-of-16 from the floor.

The Nighthawk of the Week title sponsor is Chick-fil-A of Dahlonega, with each week’s winner being treated to a complimentary combo meal at the Dahlonega restaurant.  Located at 488 Morrison Moore Parkway East, Chick-fil-A loves to give back to the local area and is proud to be a community partner with UNG Athletics.

Beginning in the fall of 2014, the UNG athletic department began honoring one student-athlete each Monday morning as the Nighthawk of the Week. The award is chosen each Sunday evening by an award selection committee made up of members of the UNG athletics administrative staff.