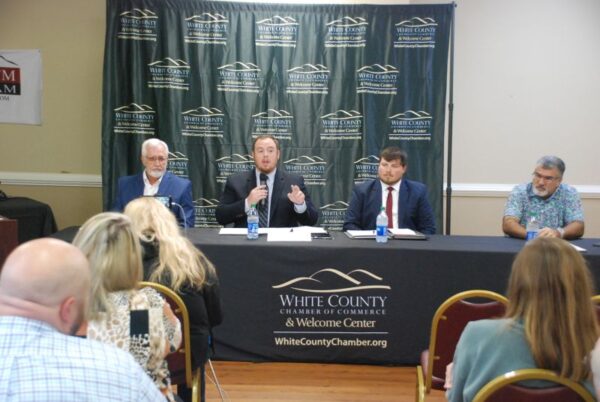 (Cleveland)-The four candidates who are seeking positions on the Cleveland City Council in the November 2nd  municipal election responded to questions Tuesday night at a candidate forum sponsored by the White County Chamber of Commerce in conjunction with White County News and Local News Radio 93.9 FM.

During the forum, held at the United Community Bank Roy Ash, Jr. Community Room candidates for Ward 3, Jeremy McClure and incumbent Kevin Stanley along with Ward 4 candidates incumbent Bradley Greene and challenger CJ McDonald shared their views on issues like what’s the most important issue facing the city, public safety.  They talked about parks and green spaces and what they would do if they had 3-million dollars to spend in the city.

In his closing comments:

Early voting begins next Tuesday, October 12th, and runs through October 29th from 9 AM until 5 PM at Cleveland City Hall.  Election day November 2nd polls will be open 7 AM-7 PM at Cleveland First Baptist Church.