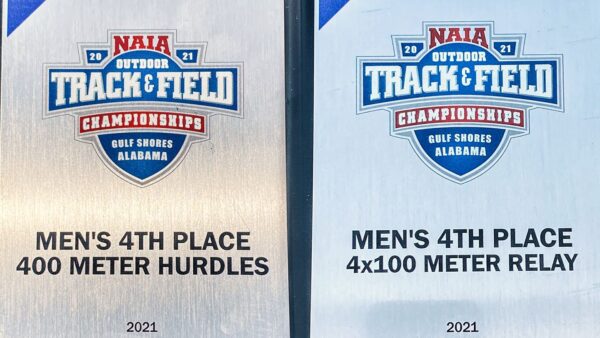 (GULF SHORES, Ala.) – The Truett McConnell University men’s track & field team had the best performance in school history on Wednesday-Friday at the NAIA National Championships in Gulf Shores, Alabama.

After the men’s 4x100m relay team, featuring Joe Parrilla, Kenny Williams, Kyshone Davenport, Keontrae Clayton, and Sharod Cobb, won their heat in Wednesday’s prelims with a time of 41.16, the Bears finished fourth overall in the finals on Friday, which is an NAIA All-America status. For reference, the top eight in every event are All-Americans.

Sharod Cobb, in the men’s 400m hurdles, finished runner-up in Thursday’s prelim before also clinching an overall fourth-place finish with a personal record and program record time of 51.88. This is the first time in program history that the Bears have had two All-Americans at the same time. Recording a total of 10 team points is also the most any TMU team has had at nationals.

“This was also the first time a relay team and a hurdler have made it to the finals, and it is the highest-ranked relay team in program history,” Head Coach Joe Imhoff said. “This week was record-breaking in many ways and it was a pleasure to watch the hard work pay off. Go Bears!”