Bears record second draw of the season against Bruins 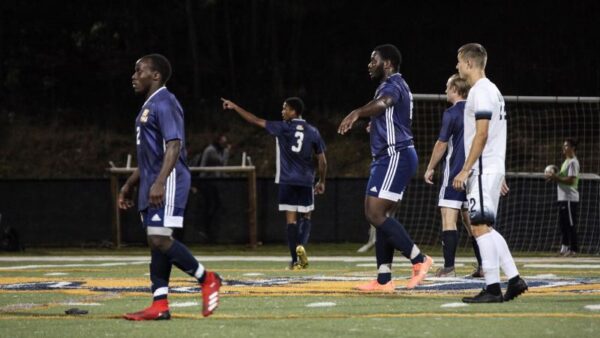 The Bruins hit the field hot by taking shots on goal, but goalie, Riley Powers, stayed resilient. The Bears turned around and took shots of their own, working around the Bruins defense. The Bruins continued to take shots on goal, but Powers remained strong throughout the first period. The Bears tried to take a lead with three corner shots, but failed to hit the board. In the second period, the Bears started hot with shots on goal of their own. The Bears proceeded to outshoot the Bruins 8-6. Both teams failed to hit the board which led to the first overtime period.

Aidan Tustin led the Bears with five shots, three on goal, while Hebert Lima had three shots, one on goal. Callum Smith, Javier Morales and Luncan Yates each had two shots apiece, while Smith, Yates, Hendrick Metje, Jez Walker-Patterson, and Nour Alamri all had one on goal. Goalie Riley Powers had eight saves on the night.

The Bears return home Saturday, September 11th, for their home opener against AAC rival, Montreat College. Kickoff is set for 4:30 p.m. inside the TMU soccer complex.