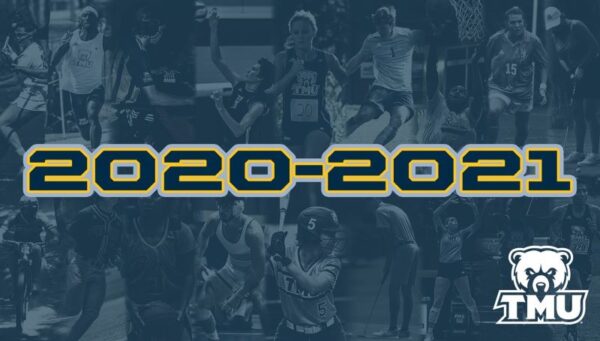 (CLEVELAND) – The Truett McConnell University Bears are carrying the momentum of the accumulated successes from all athletic teams in 2020-2021 to prepare for the 2021-2022 seasons.

In case you missed it, TMU Athletics finished fifth of 16 Appalachian Athletic Conference schools in the 2020-2021 Duard Walker All-Sports Trophy Standings, which is a point system where teams earn points based on their regular-season finish only, unless the sport (i.e. cross country, track & field, swimming & diving) only hosted a championship meet. Points are assigned as follows: first place received 30 points, second place 25, third place 20, fourth place 15, fifth 12, sixth 11, seventh 10, eighth 9, ninth: 8, 10th 7, 11th 6, 12th 5, 13th 4, 14th 3, 15th 2, and 16th 1. TMU rounded out the top five with a total of 253.5, which is the most the athletic department has ever received.

Women’s soccer dominated in the fall season, earning the title of Regular Season Champions for the third consecutive year, with a record of 10-0-1 in conference play, including a 10-game win streak. The Lady Bears were featured receiving a ticket to the NAIA National Championships, their third straight appearance, where they fell in the Hattiesburg bracket to the No. 2 seed Cumberland University and finished the 2020-2021 season with an overall record of 13-5-2. Sophomore Lauren Bergevine collected the AAC Defensive Player of the Year honor, while also earning a spot on the All-Conference first team, including three other Lady Bears on first team (Marissa Harkins, Sydney League, Ashleigh Smitherman) and three on the second team (Kristin Beasley, Madison Wright, Addy Galason).

Women’s volleyball had their most historical season, breaking the program overall and conference records ending the season at 19-8, 14-5 AAC. The Lady Bears made an appearance in the AAC Conference Tournament semifinals, where they were knocked out by the reigning three-time tournament champions, Reinhardt University, after four close sets. Senior Abby Maxwell, a vital contributor to TMU’s success, earned the title of AAC setter of the week seven times during the season, while also being named the AAC Setter of the Year and Northeast Region Setter of the Year. Maxwell was featured earning a spot on the All-Conference First Team, along with fellow teammate Ranavia Neal. Sonya Silecky also made her debut earning a spot on the All-Freshmen team.

Cycling completed their second-ever season, featuring the first program gold medal finish as a team at the Hard Labor Meet, while sophomore Foster Hutchings individually earned the first-place title on the southeast region for Bicycle Motocross.

Men’s and women’s cross country both had their best finish of the season at the North Hall Tri Meet, with the men’s team finishing runner-up and the women’s team placing first. Individually, sophomore Savannah Campbell represented TMU as she competed at the NAIA National Championships, where she finished 133rd in a deep field of 327 individuals in the women’s 5K.

Wrestling had their best season in program history, with a runner-up finish at the AAC Tournament, which featured four Bears earning their ticket to the NAIA National Championships: Ian James (174), Hans Evatt (184), Geowel Silvestre (141) and Ethan Powell (285). James and Evatt earned their ticket individually winning their weight class at the AAC Championships, while Silvestre and Powell individually earned their tickets from NAIA top 25 rankings during the regular season. TMU finished 38th out of 52 teams, featuring two decision wins and a pin in the opening round. TMU concluded their 2021 season with the best record the program has ever seen, 7-7, 4-2 AAC, along with receiving votes in the NAIA national poll.

Women’s basketball finished their season with a tied program record for wins, 13-14, 9-13 AAC, along with Re’Tavia Floyd earning an AAC women’s basketball player of the week honor. The Lady Bears punched their ticket to the AAC Tournament after beating Columbia College in the AAC play-in game, where they fell in the quarterfinals after battling the reigning four-time AAC tournament champions No. 1 seed Bryan college. Floyd was featured earning a spot on the All-Conference first team and All-Defensive team, while Sierra Kendall was named to the All-Conference second team, respectively.

Men’s basketball received their first weekly nomination for AAC player of the week mid-February, which was junior Enocka Franky, a key player to the Bears success all season. TMU’s season came to an end after a tough loss in the AAC play-in game at Montreat College. Although the Bears didn’t make it to Kingsport, three players collected AAC postseason awards. Franky was named to the All-Conference first team and All-Defensive team, while freshmen Ty Briscoe and EJ Smith earned spots on the All-Freshmen team.

Women’s track and field had their best finish in program history, placing fifth at the AAC Championships, along with multiple individual records broken throughout the regular season. Overall, the women recorded four All-Conference finishes in four different events, which is the best performance by any TMU women’s track & field team ever. Katilyn Babb won the women’s javelin of 12 individuals, while fellow freshman Addison Wilson recorded a runner-up finish in the women’s pole vault of nine individuals. Esther Nakanwagi individually claimed an All-Conference nod finishing third in the women’s 400m of 19 runners and also recorded a third-place finish with the Lady Bears’ 4x100m relay team, which also features Aaliyah Wilson, Brittany Linley and Heaven Simmons.

Men’s track and field had their own record-breaking season with numerous individual records broken, a team runner-up finish at the AAC Championships and two event appearances at the NAIA National Championships. Overall, the men recorded a total of 10 All-Conference finishes, including first-place finishes for the individual national qualifiers; Sharod Cobb in the 400m hurdles and the 4x100m relay (Joe Parrilla, Kenny Williams, Kyshone Davenport, Keontrae Clayton).

The men’s 4x100m relay team won their heat in the first day of competition at nationals and finished fourth overall in the finals, which is an NAIA All-America status. Cobb, in the men’s 400m hurdles, finished runner-up in his bracket on the first day, before also clinching an overall fourth-place finish with a personal record and program record time. This is the first time in program history that the Bears have had two All-American finishes at the same time.

Softball had another stellar season after entering into the regular season ranked No. 9 in the NAIA National Top 25, beginning with two AAC player of the week nominations, Karley Hobbs for pitcher of the week and Lauren Barrett for player of the week. The Lady Bears’ runner-up finish in the regular season secured their ticket to the NAIA national championships for the third consecutive year. TMU was featured in the Hattiesburg bracket, where they went 1-2, falling in the semifinals to the No. 2 seed Central Baptist College.

TMU finished their season with a winning record of 32-16, 21-5 AAC, featuring five Lady Bears with All-Conference awards, which is the most of any AAC team. Hobbs was named the AAC Pitcher of the Year for the third consecutive year, while Barrett was named the AAC Freshman of the Year. Also joining Hobbs and Barrett on the All-Conference first team was Briley Lawson and Mattie Brooks, along with Alicia Price who secured a spot on the All-AAC second team. Price, Lawson and Brooks were named to the National Fastpitch Coaches Association (NFCA) All-Region First Team, while Hobbs was named to the All-Region Second Team.

Women’s golf had a historical fall season of their own, with their first-ever team win at the Point Fall Invitational. The Lady Bears carried the success from the fall into the spring season, where they made their first appearance in the NAIA top 25 poll, along with an at large bid to the NAIA National Championships for the first time in program history.

Just shy of earning their ticket to the final rounds, TMU tied at 22nd as a team, with an accumulated score of 637. Although women’s golf as a whole did not make it to day two, senior Kiley Blackburn’s top 40 finish, tied for 29th, individually punched her ticket to the championship rounds, where she tied for 63rd overall with an 83 and 80 in the final two rounds. Additionally, Grace Lansdell and Madison Panter individually collected an AAC golfer of the week honor, while the Lady Bears had two earn All-Conference second-team honors; Lansdell and Teagan Lovingood.

Men’s golf had a successful fall season, featuring an individual win by senior Luke Peavy at the ALC Eagle Invite, where the team as a whole finished runner-up. The Bears secured their first team win of the season at the Point Skyhawk Invitational, capable of carrying the momentum into the AAC Direct Qualifier, where TMU’s runner-up finish earned the team a ticket to the NAIA National Championships, their second berth in program history.

The Bears’ season ultimately concluded after two rounds at nationals, with a team finish of 22nd. Michael Osborne and Nate Thornton individually earned AAC weekly nominations for golfer of the week during the regular season, along with being named to the All-Conference second team.

Baseball finished their 2021 season with an overall winning record of 29-23, 14-15 AAC. The Bears were forced to compete in an AAC play-in game, which proved successful as they bested Bluefield College to earn a spot in the AAC Tournament. TMU went 2-2 in the tournament, ultimately falling to the 13-time AAC champions No. 1 seed Tennessee Wesleyan University in the semifinals, which is TMU’s second consecutive appearance in the semifinals. The Bears had four players earn AAC postseason awards, including Josh Johnston on the All-Conference First team, and Andrew Johnston and Brooks Rosser on the All-Conference Second Team. In addition, Tanner Griffith won the Rawling’s Golden Glove at second base.

Women’s lacrosse finished their season with a tying win record of 4-5, 4-4 AAC, with the Lady Bears earning a spot in the AAC Tournament for the first time in program history. TMU had two AAC weekly honors, with Hope Foster named offensive player of the week twice and Skylar Sewell named defensive player. The Lady Bears were knocked out of the tournament by Asbury College in the opening round, while two players earned All-Conference honors. Hope Foster earned a spot on the All-AAC First Team, while sophomore Carter Culverhouse was named to the All-AAC Second Team.